Have you ever thought about building a lava lamp? Let’s find out how to do it together: just a few materials are enough to learn something about the density of liquids.

Making a lava lamp requires materials that are easy to find, this is a great experiment with the density of liquids: it’s easy to do and very beautiful!

How to make it?

To build a lava lamp, first pour a quarter of water into a bottle and color it with a few drops of dye. We used blue dye because it stands out so much compared to the color of the oil. 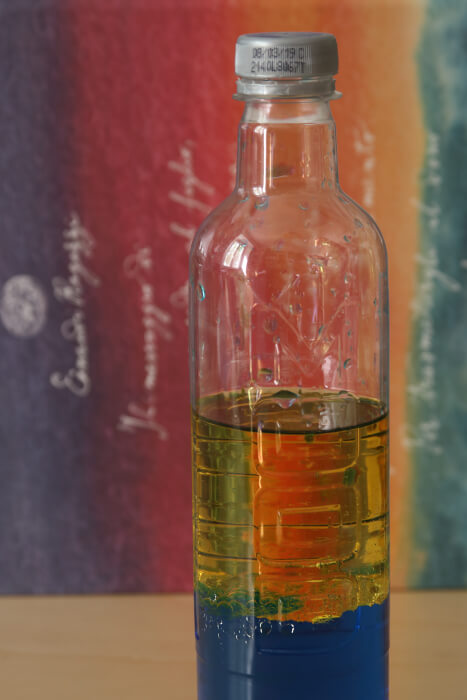 After that, on top of the first layer in the lava lamp, we create a second one from oil. To do this, pour two quarters into the bottle. Be careful not to fill the bottle with water and oil completely: leave some free space! Oil and water do not mix: they remain two well-separated layers.

Take a quarter of the effervescent tablet and drop it into the bottle and close the lid. As soon as the tablet reaches the water layer, it will begin to boil. Bubbles of colored water will gradually appear and rise up until the effect reaches its maximum in a real lava lamp. 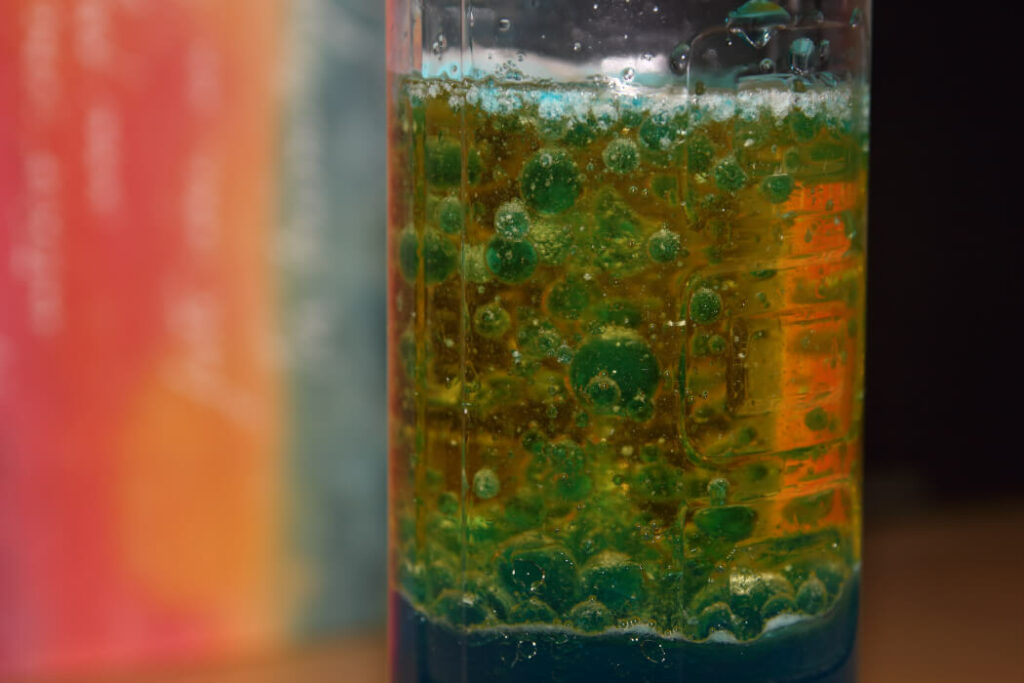 Pay attention to the size of the effervescent tablet. It doesn’t have to be so big: a quarter or half is more than enough. But let’s not put too small a piece, because it may not sink in oil and never get into water, then the lamp will not work.

We can make a real luminous lamp out of it by adding light to the base of the bottle, like a mobile phone flashlight.

When a lava lamp reaches the end of its life, it is important that its contents are not released into the environment. In fact, its chemical components can harm the ecosystem if they end up on the ground or in sewers, as happens with soap. You need to pour the contents of the lava lamp into the toilet or sink.

How does a lava lamp work?

Water and oil do not mix, this is because oil is lighter than water. Just as a piece of wood floats in water because it is lighter, so does oil. If you look through a supermicroscope, you can see that the particles (molecules) that make up oil are wider and rarer than those that make up water. When we throw an effervescent tablet into a bottle, it first passes through the entire oil layer and meets with water, the water begins to boil, resulting in the formation of air.

Small air bubbles rise up, but they are also lighter than oil, so they continue to expand when they hit it. The colored bubbles we see rising through the oil as they reach the top of the oil layer and come into contact with the oil. Never underestimate the importance of proper lighting in the kitchen. Pendant lights, wall sconces, and table lamps all suit your needs! Here’s everything you need […]

Have you ever thought about building a lava lamp? Let’s find out how to do it together: just a few materials are enough to learn […]

To illuminate the garage, we recommend wall lights. Also don’t forget the space in front of the garage; take a look at outdoor lights, preferably […]